Let’s Get the Patch! Meet Dixie: A Go North 9er

Dixie, a retired health education teacher who taught for 24 years is no stranger to health and fitness.  The active 72-year-old, Pittsburg, NH resident loves getti 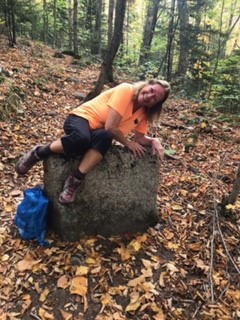 ng outdoors to walk, do some fly fishing, hit the snowmobile trails, snowshoe, and cross country ski, so it’s no surprise that when a friend of hers suggested, “we should start a hiking club,” Dixie said, “okay…sounds good to me.” The novice hiker figured if she could walk five miles with no problem, then why not take on hiking?

It was just a little over a year ago when tackling all nine peaks of the Go North 9er Hiking Challenge seemed like a big joke. “I looked at the flier and showed it to my friend, Yvette and she said, ‘we should do this’, says Dixie. “It became the biggest joke. She’s like, ‘oh yeah let’s get our patch and our certificate. We’ll be so cool.’” But, that joke turned into reality as Dixie, Yvette, and Dixie’s best friend, Rochelle embarked on the challenge.

Today, Dixie and Rochelle (you’ll meet Rochelle soon) have both the patch and bragging rights of newly initiated Go North 9ers by climbing all nine peaks of the Go North 9er Hiking Challenge.  Yvette’s got a few more peaks to check off her list.

Magalloway, in NH, at 3,383 feet was Dixie’s first peak in August of 2021 before she even knew about the Go North 9er. The final peak completed was Gore Mountain in Vermont in October of this year. Dixie and Rochelle were the only two of their “hiking club” group to complete all nine climbs.

“Gore was just a pleasant walk in the woods,” says Dixie.

It’s safe to say though that Dixie would not describe her entire challenge experience the same way.

“I am never doing Sugarloaf ever ever ever again. That, to me, was straight up both ways. Even coming down seemed straight up,” says Dixie. As she explains, she really had to push herself, focusing on taking just ten steps at a time. And, while she may have dropped some bad words over the course of that hike, the payoff made the climb well worth it. She says, “that was a hard hike for me, but the view at the top was absolutely drop dead gorgeous.”

Dixie would also advise climbers not to do North Percy and South Percy on the same day. “That was a bad error on our part,” she says. South was a breeze, but at the top, seeing North from South’s peak was another story. “I was like ‘holy moly’. That was daunting to say the least,” says Dixie. Nonetheless, they proceeded to Percy North. “I think I bear crawled halfway up,” laughs Dixie. She explains though that she loved the terrain, as it changed all the time.

Her friend Yvette was having a tough time with Percy North too as she called to Dixie from behind and asked her to call a helicopter because she felt she couldn’t go any farther. They were so close to the top, so Dixie did not call a helicopter. Rather, she encouraged her friend to keep going, telling her to just continue crawling the way she was until she got to the top. Dixie laughed as she explained, “I told her, ‘Listen…I’ll walk behind you, so if you fall on me, both of us will go down.’” And, Rochelle, who was up ahead, pushed them to keep going as well, saying “we are going to finish this together!”

With that persistence, Dixie, Yvette, and Rochelle proudly made it to the top of Percy North. “That view was spectacular. Absolutely spectacular,” says Dixie.

Table Rock is another popular hike of the Go North 9er. When friends and family from out-of-town visit Dixie and her husband, that’s their go-to hike. “it’s just a great view,” says Dixie.

It was quite a year for the novice hiker and the friends who joined her throughout the challenge. Six peaks were completed in 2021, with the final three completed this year.

In the end, completing the Go North 9er meant so much more to Dixie than a patch. There was laughter had, challenges conquered, memories made, and so many stories to tell. What’s more though, she explained it meant that “At my age, that I can still get out there and stay up with the girls because they are a lot younger than I am. I felt good that I’m still able to do stuff like that. And I’m fortunate that I’m healthy enough to do stuff like that. It’s a blessing, so I’m thankful for that.”

Favorite Moment: Getting to the top of Sugarloaf. It was a challenge, but the view was worth the climb. 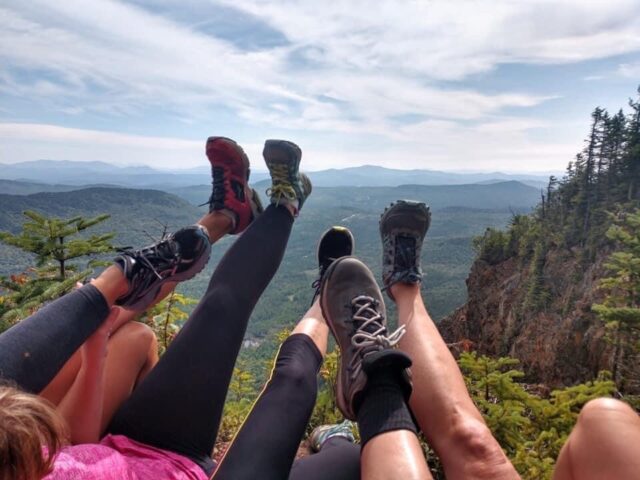 Previous
Don’t do Winter without MOMS
Next
I Want to Keep Going! Meet Rochelle: A Go North 9er
Share