New Hampshire’s award-winning Weathervane Theatre and acclaimed Off-Broadway theatre company Out of the Box Theatrics (OOTB) are proud to announce Alex Carrera and Kelly Strandemo have been selected as Playwrights in Residence for the second annual OOTB Residency at Weathervane Theatre.

The OOTB Residency at Weathervane Theatre is a week-long residency program where the two organizations will collaborate on supporting works in development. These emerging plays will receive rehearsals and a fully staged reading at the Weathervane. Carrera’s Secretos was selected from a nationwide search. Strandemo’s Primary was commissioned by the Weathervane after the success of Strandemo’s The Congresswomen, a political comedy that was part of Weathervane’s 2020 season.

Alex Carrera is a Latinx actor and writer with cerebral palsy originally from southern California, and graduated from the University of California, San Diego with a B.A in Theatre in 2020. The writing residency with Out of the Box Theatrics and Weathervane Theatre is his first professional job since graduating and he is excited to be part of this community of theatre and art makers. 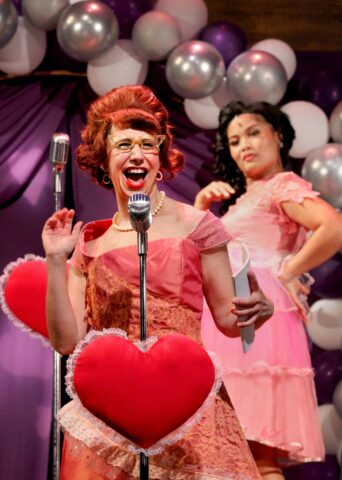 Kelly Strandemo previously appeared at Weathervane in The Congresswomen, for which she also served as playwright/adapter. Kelly has appeared on stage off-Broadway, regionally, and in London, and can be seen in the upcoming films Cardiff and B&B With Me. Kelly holds a Master’s Degree in Classical Acting from the London Academy of Music and Dramatic Art (LAMDA).

Strandemo’s Primary takes place right here in New Hampshire. It’s an election year in the Granite State. The dwindling number of residents of a small town are thrilled when a new family moves in, thus ensuring the national attention they receive from their traditional Primary can continue. But when the new residents are anything but “traditional,” assumptions of each person’s primary desires are uncovered as they navigate how to pursue life, liberty and happiness as a community.

In person and livestream tickets are currently on sale HERE. Tickets can also be ordered via phone at 603-837-9322. Please check the website for current in person COVID-19 seating policies. For pay what you can options please contact Ethan@weathervanenh.org.

Previous
Tall Timber Lodge: A North Woods tradition since 1946
Next
Plan your Peeping Trip. Follow the Foliage with this Foliage Tracker.
Share